One of these famous buildings, the Umaid Bhawan Palace, was constructed between 1928 and 1943. The palace is said to be built of magnificent yellow sandstone and encompasses a garden that spans 26 acres, making it one of the largest private mansions in the world. Art Deco and Renaissance architecture blend beautifully in this facility, which also features two pools and the luxurious Jiva Grand Spa.

The Umaid Bhavan palace is located on a hilltop above Jodhpur, the capital of Rajasthan’s desert region. It is reportedly a 15-minute drive from the airport and 2.4 kilometres from the train station. Clock Tower Market, the Mehrangarh Fort, and the Jaswant Thada monument are all within 9 kilometres of the palace and can be visited on the way. 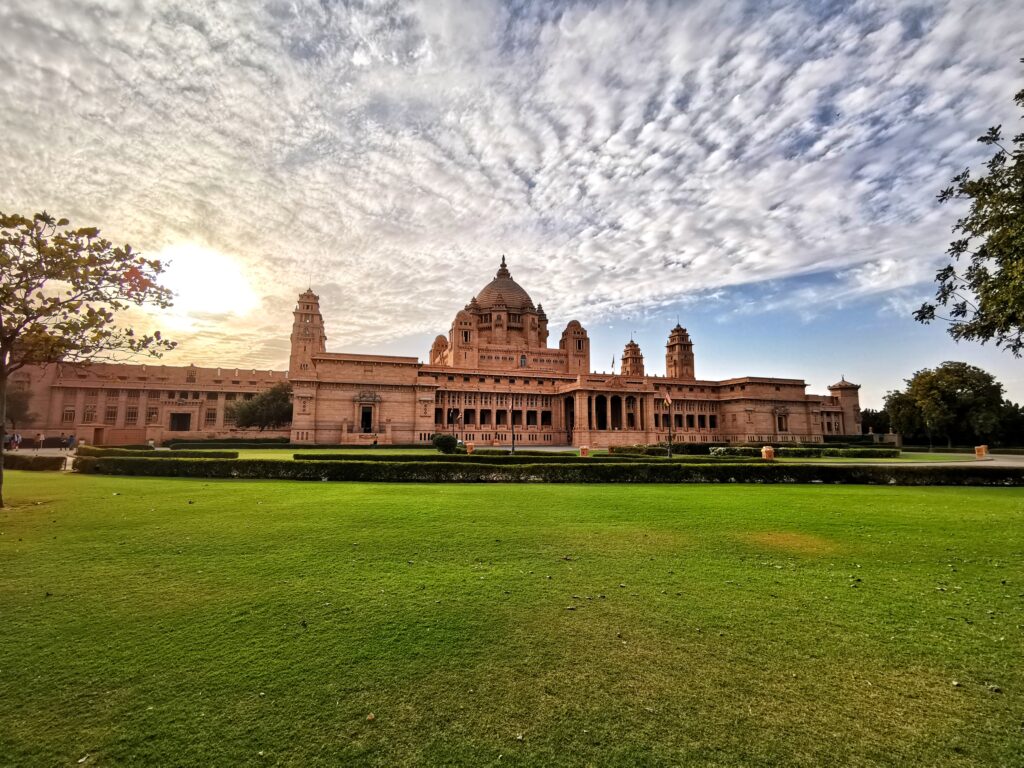 1. It’s a museum, a palace, and a palace all rolled into one:

One of Chittor Sandstone’s two major wings is a royal home. This palace wing is believed to house the Rathore dynasty, who conceal their royal lifestyle. Maharaja Umaid Singh’s grandson, Maharaja Gaj Singh, lives with the family.

As mentioned above, the palace owns and manages the other palace wings. They manage 64 rooms and suites. The Maharani Suite, Maharaja Suite, Royal Suite, Regal Suite, and luxury rooms are further subdivided. Family portraits, leopards, and plush animal heads may also be visible. Hotel visitors can admire magnificent peacocks in their suites. This upmarket restaurant serves Indian, international, a la carte, and international wines.

On-site is a museum. Amazing specimens are on show. Before displaying glassware, china, and other artefacts, the museum discusses palace construction. The museum’s unique exhibits include stuffed leopards, Queen Victoria’s massive banner sent to Maharaja Jawant Singh in 1877, and others. These Maharaja-owned classic automobiles are included. The Darbar hall’s tiny paintings and royal court artifacts are precious.

The final pre-independence Indian palace was Umaid Bhawan. 1928–1943 laid this basis. The country gained independence four years after the palace was finished. Independent India has no royal kingdoms and only opulent houses. Maharaja Gaj Singh, a descendant of Maharaja Umaid Singh, lives here. Would you not like to meet Maharaja and his family here?

3. Built for a noble cause:

Umaid Bhawan Palace has an intriguing history. In the 1920s, famine ravaged Marwar, now Jodhpur. The distressed turned to Maharaja Umaid Singh for help. His Royal Highness, thought to be the grandfather of the current Maharaja, generously commissioned a new palace to employ everyone there. The costly endeavour that employed the poor was a gorgeous private apartment for travellers and a symbol of optimism and Jodhpur’s new image, replacing the Mehrangarh Fort. From 1928 until 1943, this venture gave hardworking people enough to endure terrible times.

The Maharaja may have recruited British engineer H.V. Lancaster to create this opulent house. Lancaster also designed the other government complex. The inside of this structure is designed in Makrana marble and Burmese teak wood in Indo-Saracenic, Classical Revival, and Western Art Deco styles.

The Umaid Bhavan Palace has 26 acres of verdant grounds and 15 acres of well-kept gardens. This royal home features 347 rooms, a throne chamber, a banquet hall, a ballroom, and more. This lovely property’s gardens contain peacocks and views of Mehrangarh fort and other sights.

When to visit umaid bhawan palace

We recommend that you come here anytime between 9 AM and 5 PM, Monday through Friday. The cost of entry is quite affordable for anyone. It is generally agreed that October through March, commonly known as Rajasthan’s “winter season,” are the best time to visit the state. No visitor would need more than two hours to see everything and take a leisurely stroll through the garden.

Manvar Desert camp near Jodhpur, located in the heart of Rajasthan, provides guests with a choice of air-conditioned bungalows as well as an outdoor swimming pool. The property is located on a dune and is a 2-hour journey from Jodhpur.

It is around 100 kilometres from Jodhpur’s nearest airport and railway station. Airport transport is available for an extra fee.

All of the rooms at Manvar Desert camp have a fan, a closet, and a seating space. Each guestroom has a private bathroom with shower amenities. Air conditioning is available in the rooms.

Which sweet is famous in Jaisalmer?