Jaisalmer Fort is located in the Indian state of Rajasthan, in the city of Jaisalmer. It is thought to be one of the world’s few “living forts”, with roughly one-fourth of the old city’s population still residing within the fort. The fort served as the city of Jaisalmer for most of its 860-year lifespan. According to legend, the first settlements beyond the fort walls were built in the seventeenth century to accommodate Jaisalmer’s expanding population.

The golden fort appears like a mirage to visitors who visit the city of Jaisalmer in the desert. As you approach, you understand that it is more than simply a Jaisalmer landmark. It is the very essence of the city. Upon beginning this tour of the Jaisalmer Fort, you will realize something. Visiting the famous Jaisalmer Fort is one of the top epic things to do in Jaisalmer

The fort’s massive yellow sandstone walls are a tawny lion color during the day, fading to honey-gold when the sun sets, thus camouflaging it in the yellow desert. This is why it is also known as Sonar Quila or Golden Fort. The fort is located on Trikuta Hill, in the middle of the vast Thar Desert, and is thus also known as Trikutgarh. It is now located on the southern outskirts of the city that bears its name, with its prominent hilltop location allowing the vast towers of its walls to be seen for miles around.

History
Rawal Jaisal, a Bhati Rajput, built the fort in 1156 CE. According to legend, it replaced an earlier structure at Lodhruva that Jaisal was dissatisfied with, and therefore a new capital was constructed when Jaisal founded the city of Jaisalmer.

The fort was attacked by an Afghan leader named Amir Ali during Rawal Lunakaran’s reign, between 1530 and 1551 CE. When it appeared that the Rawal was fighting a losing war, he slaughtered his womenfolk since there was not enough time to organize a Jauhar. Regrettably, reinforcements arrived just after the crime was completed, and the army of Jaisalmer was triumphant in its defense of the fort.

The fort remained under Mughal authority until 1762 when Maharawal Mulraj gained possession.

With the arrival of British control, the introduction of marine trade and the expansion of the port of Bombay contributed to Jaisalmer’s steady economic downfall. The old trade route was completely stopped after India’s independence and partition, permanently depriving the city of its former role of prominence in world commerce.

Due to the surviving family, Jaisalmer Fort continues to exist. According to reports, a quarter of the city’s population still resides in this fortress. The fort of Jaisalmer was officially designated a UNESCO World Heritage Site in 2003. While repair is still under progress, the fort has severe seepage concerns, resulting in the collapse of important structures, such as the Queen’s palace. 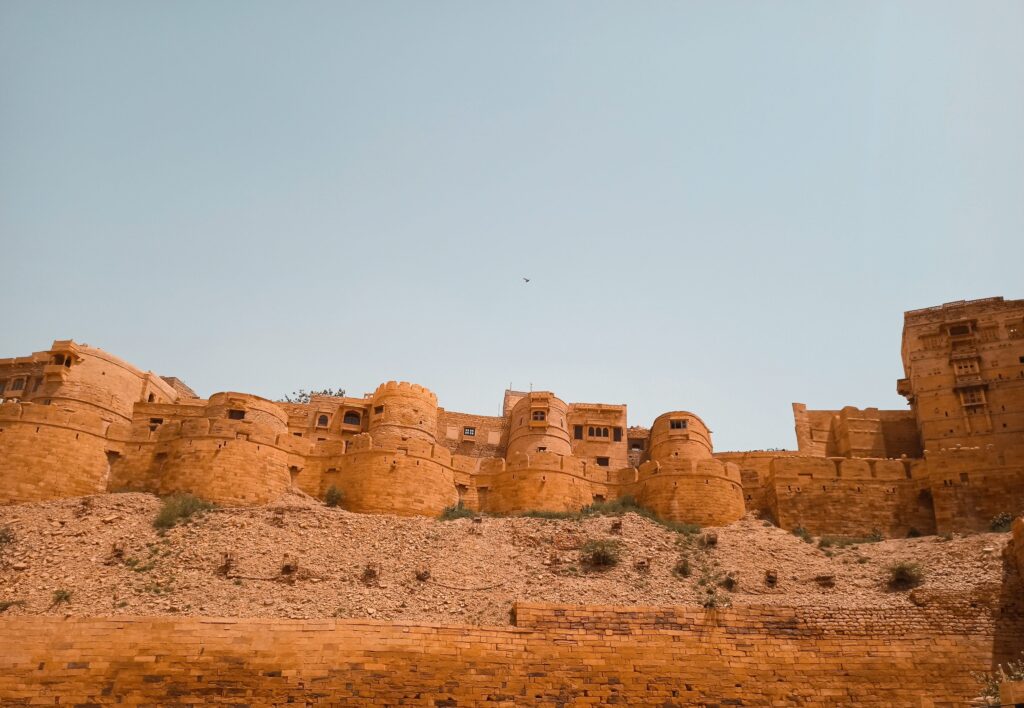 The architecture of Jaisalmer Fort

The huge fort has three rings of walls that surround a real city. Ganesh Pol, Suraj Pol, Akshaya Pol, and Hawa Pol are the names of the four entrances to this fort. These doors are made of rosewood and are 60 feet tall. They are just as impressive as the buildings inside the fort.

The upper bastions or towers of the fort comprise a 2.5-mile-long inner-wall perimeter. Currently, the fort consists of 99 bastions, of which 92 were constructed or restored considerably between 1633 and 1947. One of the fort’s four fortified entrances or gates from the townside was previously guarded by a cannon.

The fort’s unique ghut nali drainage system provides for the efficient drainage of rainwater in all four directions. Over the years, haphazard road construction and the construction of new highways have drastically diminished its effectiveness.

The Jaisalmer Fort, unlike most other forts, was built on a weak sedimentary rock foothill, making its foundations extremely vulnerable to seepage. This has resulted in the collapse of substantial elements of the Fort, including the Queen’s Palace or Rani Ka Mahal, as well as parts of the outer boundary wall and lower pitching walls.

The World Monuments Fund and the UK-based organization Jaisalmer in Danger have conducted extensive restoration work. The lack of coordinated activity between the many government departments responsible for civic amenities, the local municipality, and the Archaeological Survey, which is responsible for the fort’s maintenance and repair, is a major hindrance to its preservation and restoration.