“I wanted to create a building about light and community — a structure that resonates with the soul of its people and enforces the natural energies to nurture and heal the women and girls” says Diana Kellogg, the New York-based architect who designed the school.

A region in India where female literacy is just above 30% has now poised to become an irony, by making the world turn their attention towards a school made for girls. The place serves 400+ girls, for K-10, from below the poverty line. It stays isolated from the towns and even many desert camps in Jaisalmer. And has sent a strong message across the world by building a school in the middle of sand dunes and making it a place of dreams for girls.

The structure does not only stand as an architectural marvel but also as a story of empowerment and sustainability. It lies in the remoteness of the dusty Thar Desert where temperatures range from 40°C to 50°C and have constant blowing, dust-raising winds and sandstorms from 140-150 km per hour. To build a school in such dramatic weather is a marvel in itself, and after a decade of conceptualising, this dream has come into existence in 2019. With the help of the non-profit organisation CITTA that supports development in some of the most economically challenged, geographically remote or marginalised communities in the world, this school was built to educate and empower women of the region as the primary goal. 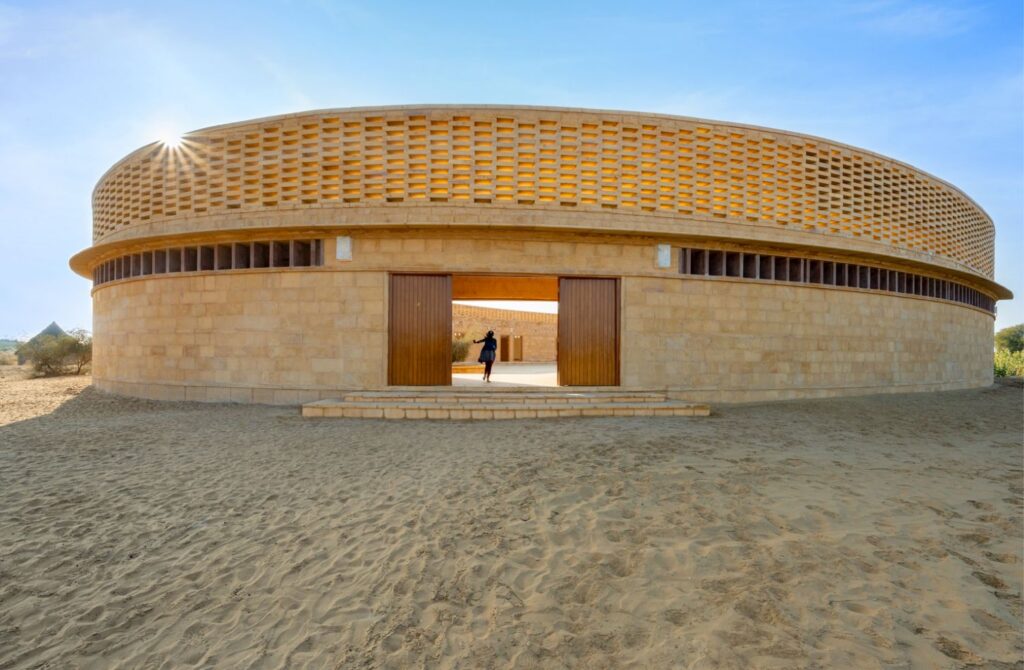 “Architecture should speak of its time and place, but yearn for timelessness” – Frank Gehry

Who knew a school in the isolated Kanoi Village of Rajasthan would stand true to the timelessness Frank Gehry speaks about. The school, which is built entirely out of local hand-carved Jaisalmer yellow sandstone by local craftsmen, has facilities that include classrooms, a library, a computer centre, solar panels for electricity, midday meals and bus facility to ferry girls from nearby villages. Kellogg made sure to include the community in a building made for the community. Using local materials to create an infrastructure that helps reduce carbon emissions, the designer made sure to tick all the boxes.

Famed Indian fashion designer Sabyasachi Mukherjee was brought in to create the uniforms for the students of The Rajkumari Ratnavati Girl’s School. Sabyasachi used Ajrak, a traditional textile from the region that is block-printed with natural dyes using a technique that predates modern history. They were made to reflect the region’s craft heritage to highlight the beauty and power inherent to the crafts, as well as provide a better sense of community, connection and pride for their home.

“Effective design is a process requiring deep understanding of the history of a place – its culture, its topography and its vernacular”comments Kellogg, and after searching for feminine symbols across cultures she chose three ovals to represent the power of femininity, infinity and as a symbol of strength. The elliptical structure blends seamlessly with the surroundings and the curved walls go hand-in-hand with Rajasthan’s heritage carrying forts. The solar canopy on the roof with a metal framework doubles as a jungle gym with seesaws, swings and monkey bars for the girls. Visitors are greeted with sweeping staircases and a wall decorated with diyas, small stone flower medallions signifying each classroom and the donors for the project. With winding corridors and a stretching terrace, all donned with furniture made locally out of rosewood with classic Charpai woven seating and the parapet wall is also featured as a reinvention of the Jallis which are screen walls traditionally used to hide women for privacy. By choosing to build a solar panel canopy on the roof and using lime plastered walls as a cooling system the oval marvel doesn’t need an air-cooling system to keep the interior pleasant, making the whole desert look at it with envy. 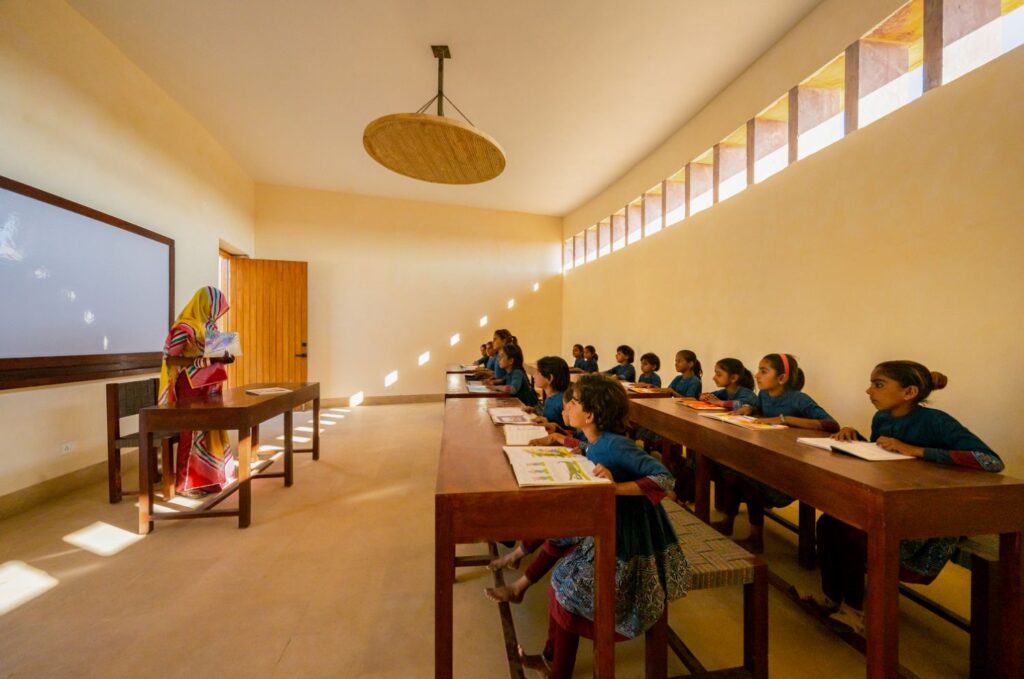 The school is the first in a complex of three buildings known as the GYAAN Centre which will empower and educate women, helping them establish economic independence for themselves, their families, and communities. It will also consist of The Medha – a performance and art exhibition space with a library and museum, and The Women’s Cooperative where local artisans will instruct women in weaving and embroidery techniques from the region that already have a patronage globally. Also, an interesting fact about it to awe you is that the courtyard where the girls run around playing, can also harvest 3.5 lakh litres of water and store it in its belly. Thus, making the school stand as a perfect symbol of empowerment, education, and environmental conservation.

With a high number of child marriages, shockingly high rate of female infanticide, lack of female education, the community and its women have been living in disadvantage and leading a life of poverty, lacking opportunities to overcome it. It can be said that the community needed the school as much as schools need to serve people. 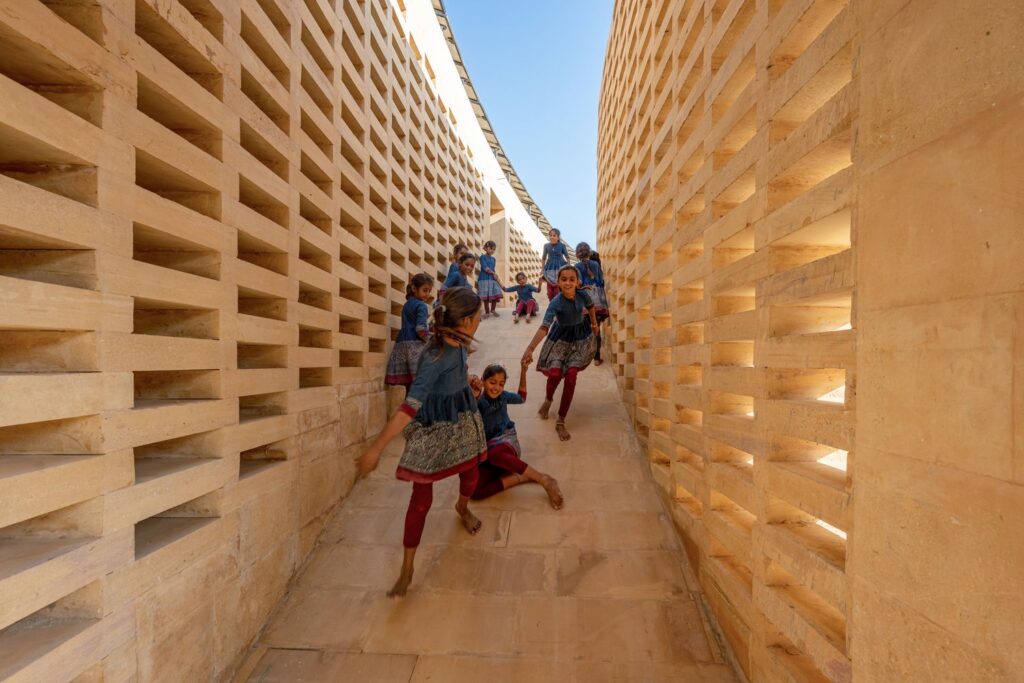 When someone reads about the school, it’s sure to make their hearts feel warm and would definitely get them inspired at what this structure of architecture symbolises. And if they ever had the opportunity to visit Rajkumari Ratnavati Girl’s School, and could see the happy faces of the girls there, it’s sure that they would understand why this is a place where dunes are turning into dreams.