The History of Bada Bagh Jaisalmer 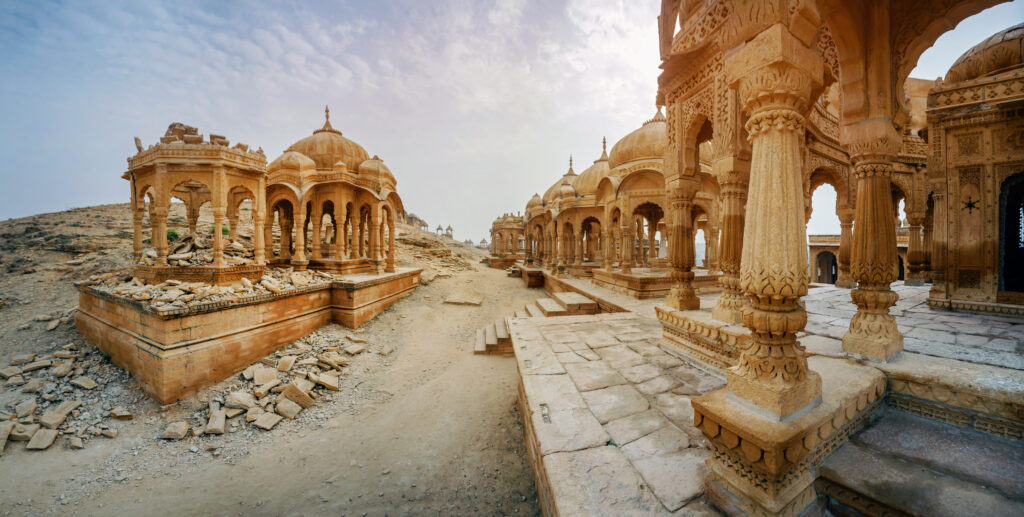 The name Bara Bagh, which translates to “large garden,” is used for Bada Bagh in the local dialect. But this is not a garden, far from it. For those Kings and Queens who have died away, this area was created as a memorial to the royal family.

The word “Chhatris” refers to the traditional tomb-shaped cenotaphs. Initially, Jai Singh II’s son Lunkaran had one constructed for him in the sixteenth century. The desert area near Jaisalmer has become greener thanks to Jai Singh II. He built a dam close to a lake to reduce the area’s oppressive heat. The cenotaph and surrounding park were built by his son as a memorial to him next to the dam.

As soon as a royal member of the Jaisalmer rulers passed away, the Chhatri ceremony in Bada Bagh Jaisalmer was held in their memory. This went on up to the 20th century, when Maharawal Jawahar Singh’s final one was rendered ineffective since his son, who succeeded him as king, passed away just a year after ascending. Since cenotaphs at Bada Bagh were no longer deemed customary because of this, it was considered bad luck.

The design of the cenotaphs in Jaisalmer 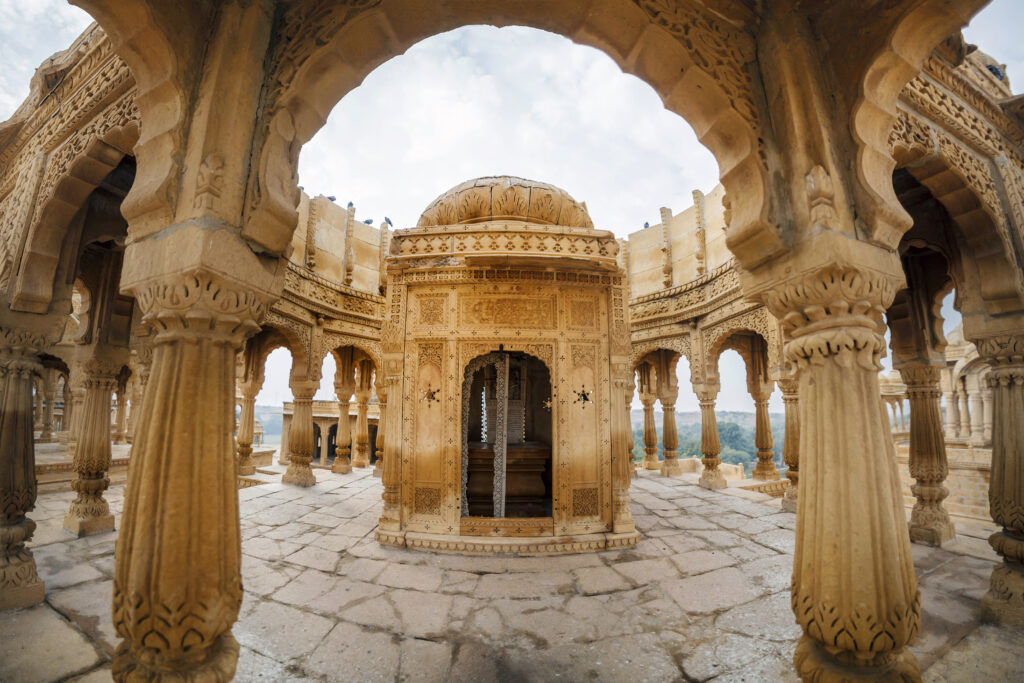 Have you ever experienced wanting to keep anything that you find to yourself exclusive because it is so beautiful?

You are unsure of how to begin and worry that getting it wrong may ruin the excitement if you start it or touch it incorrectly. Despite your best efforts, you are unable to leave it elusive. As you enter the cenotaphs at Bada Bagh, you will undoubtedly feel that way. All you want is to capture it all in a moment

The entrance to Bara Bagh is at the bottom of a hill, where it is situated. Two unique rows of cenotaphs, each similar and yet distinct, may be found at the location. It’s astonishing how the carvings on the plain stone structures stand out despite having little colour contrast, adding to the cenotaph’s beauty. The simple stone structures have some exquisite carvings on them.

The significance of the different-sized cenotaphs in Jaisalmer is clear despite their differences in size. The size of your cenotaph increases with your level of power. Naturally, the largest belonged to the main Maharaja, while smaller ones were strewn about, perhaps signifying princes and other minor royal members. These have rather remarkable roofs that give the little building a shrine-like look.

You can infer a person’s importance from more than just their size. The significant buildings had complex pillars, ceilings with fine carvings, and beautiful domes. Naturally, a lot of these have fallen apart over time, but their grandeur is still visible.

Stone Tablets and Marble slates inside the Bada Bagh Cenotaphs 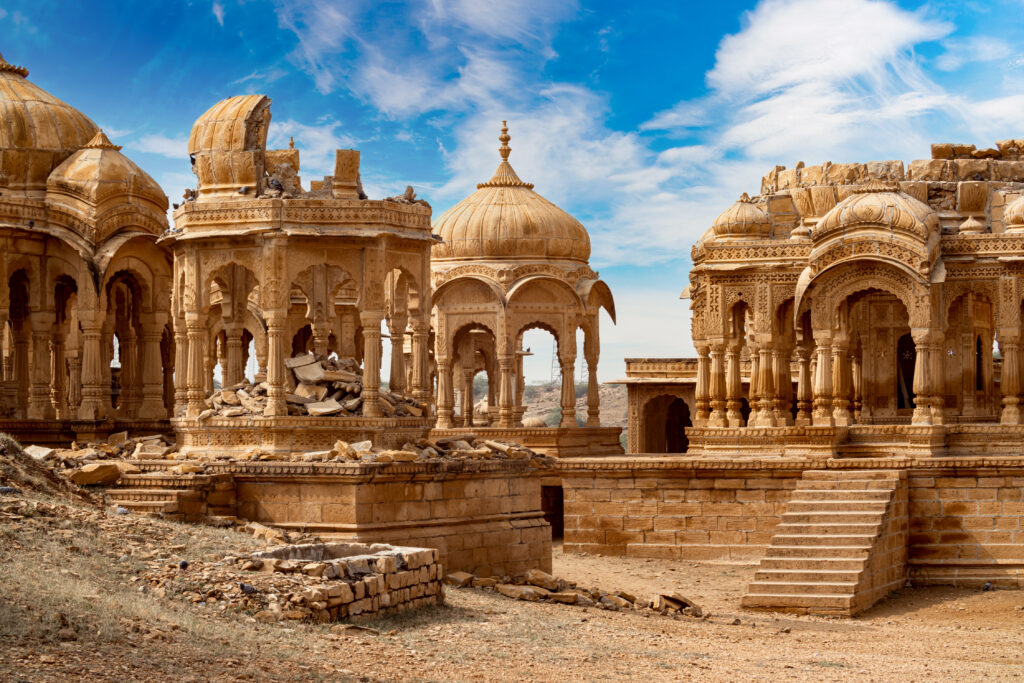 There are tablets that reflect the king for whom each Bara Bagh cenotaph was built inside each monument. The older ones were made of the same golden sand stone as the rest of its exterior, but the more modern ones had marble slabs.

These stone and marble pillars along the Chhatris are all engraved with the identical image of a monarch riding a horse. There were some women along with the same. The numbers represented the ruler’s total number of wives.

It represented the women in the ruler’s life who committed suicide or found satisfaction by hopping onto the ruler’s blazing pyre. While his concubines were represented by the tablet with several ladies, his queen was depicted on the tablet next to the emperor.

The way the horses are pictured on the tablets of the Bada Bagh Cenotaph is another fascinating feature. The owner of the horse perished in battle if the animal’s front two legs were in the air. If only one leg was raised, it meant that the monarch had been severely wounded in combat and had died as a result. The king had passed away naturally if there were four legs on the ground.

Except for one cenotaph, all of Bada Bagh’s cenotaphs contain stone or marble tablets. The one that has been intentionally left unfinished for Maharawal Jawahar Singh is the last and most recent of the bunch.

You will see that there is no memorial when you ascend and enter this particular cenotaph. Instead, a stand with a doodled portrait of the king and an earthen water pot. This is positioned in the cenotaph of the most recent decedent in an effort to fill his thirsty soul. Take note of the inscription at the cenotaph’s entry. This is just the name of the monarch for whom the cenotaph was constructed. Maharawal Jawahar Singh in this case.

Along with the Chattris, look for the Govardhan Sthambh, a pole. This is near to the dam region that abuts the cenotaphs at Bada Bagh. It was constructed to honour the tank and dam that the first king, who was cremated at Bada Bagh, had started.

The beauty of the location is undeniable even though the overall appearance of the site is one of abandonment. Discovering these clever hints to the Jaisalmer royalty’s past that are concealed in these missing cenotaphs is what makes your trip to Bada Bagh Jaisalmer interesting and unforgettable.

Explore the beautiful Cenotaphs of Bara bagh while staying in Jaisalmer desert Camp at Manvar.