The region of Rajasthan has a long and rich history of culture, heritage, and spirituality. The centuries-old architecture still stands majestic with the endless yellow background of the sand dunes of Thar. The majestic land of the Rajputs and the kalaakars carries stories of the several generations that lived and thrived there. The streets lined with homes that reside huge families and tales are covered with a layer of the nature, the sand. A unique hint of the past can be sensed through the Rajasthani atmosphere which is just so homely and nostalgic even for the first time visitors. The huge cities thrive with people, colours, energy and fast-paced life of today but the villages and small towns with people just as if not more experienced than its architecture give off a scent of time moving slow, almost still. The old buildings and temples of Rajasthan are indeed timeless and send us down the avenues filled with tales of worship, wars, pride, and lives before us.
We will get to know about one such town and the temples there that stand tall dating back centuries. About 70 kilometres from the city of Jodhpur, lying in the Jodhpur district itself lies a small panchayat village called Osian, pronounced as Osiyan. It is believed that Osiyan was established by a Rajput prince named Utpaladeya and that earlier was called Ukesha or Upkeshapur. An old religious hub, Osian was an important place in the Marwar kingdom and a major centre for trade during the Gupta period. This village is well-known for being an ancient town in which old ruins of temples in Rajasthan reside. It is believed that these ruined Hindu and Jain temples date back from 8th to 12th centuries. 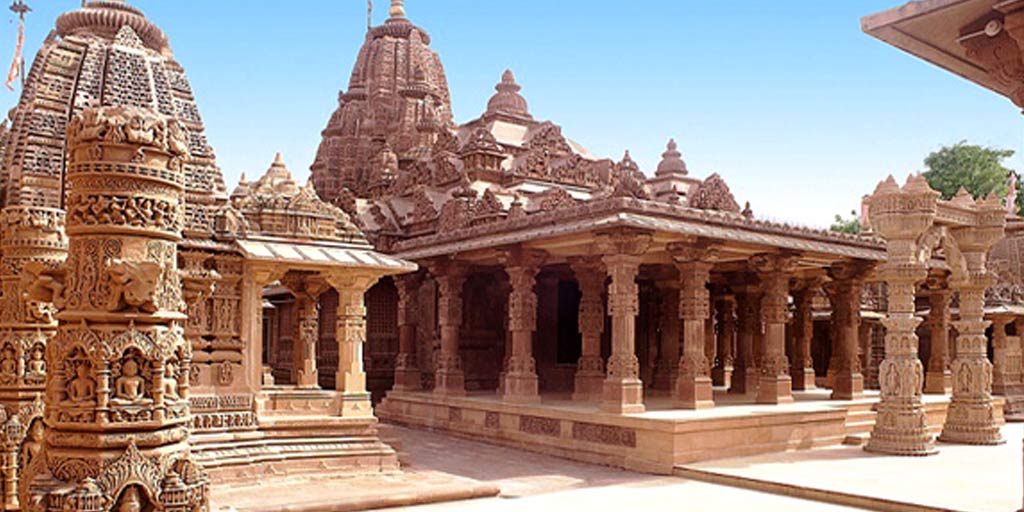 Amongst the many temples, the Surya temple of Osian is a beautiful sight to behold. Said to be dating back to the 10th century, the Surya temple is one of the most important ancient temples of Rajasthan. Dedicated to the Sun God Surya, this temple is a magnificent example of old architecture and craftsmanship which can be admired on the outerwalls and ceiling of the structure carrying intricate carvings of serpents, lotuses and the life of Lord Krishna. The temple structure is of north Indian style containing a high tower called a shikhara shaped like a kalash. It even has idols of Lord Ganesha and Goddess Durga. The idol of Lord Surya is unique to its tense and straight stance with passionate lotus eyes and two plaits depicting his hair. Placed in the centre, it exudes peaceful energy. This stone structure has many pillars with enamouring carvings and designs that only leave us wondering about the skills of the sculptors who may have worked on the building. Though the structure is mostly in an abandoned state now, it is still worth a visit.

It is an elegant place with lots of good energy to replenish you during your journeys through Rajasthan. The surrounding village is calm and people are kind and mind their own lives. It is a nice way to spend a lazy afternoon and gain some positive energy by visiting this temple only about two hours from Jodhpur. Have some conversations to the people of Osian and they will tell you the tales of the ancient town right from the temples to the trade routes and kings. The temples of Rajasthan are a treat for not just the religious pilgrims, people on the spiritual quest, wanderers through the desert in search for shelter, but also a wonder for the lovers of history and architecture.

And not too far from the temples, only about 80 kilometres, is another exquisite experience in the form of a resort in the desert. An absolutely wonderful time can be had at Manvar Resort and Desert camp in Rajasthan’s vast desert that lies between Jodhpur and Jaisalmer. An experience like never before is offered here amidst the sand dunes of Thar. Rajasthani culture, music, food, camel safaris and nights stargazing in the cold desert are some of the peeks. Our desert camp in Rajasthan is unique in a way that we do not just offer tents to stay and refreshments but give a luxurious experience of the desert and Rajasthan. Do give us a visit and have an experience of a lifetime in the royal region of Rajasthan.