Rajwade, the Rajput’s’ homeland, is a foodie’s paradise. Rajasthani cuisine is one of those rare cuisines that boasts an endless platter of dishes ranging from tangy drinks to spicy starters, mouth-watering sabzis and crunchy bread, as well as added delights of chutneys, achars, papad, and chhach. It would be a moment of pride to mention the exquisite desserts and delicious crispy treats that melt in your mouth in an instant! Let us check out some special food that one can try when in Jodhpur.

Rajasthani cuisine is influenced by the state’s rich tradition and arid climate. Their food is distinguished by the scarcity of fresh fruits and vegetables. Beans, lentils, gram flour, corn, barley, millet, bajra, bread, and dairy products are all frequent ingredients (esp. Ghee). There is a preference for vegetarian eating, however other types of meat dishes are also popular. JWM is situated 10km short of Jaisalmer on the Jaisalmer- Jodhpur highway. Next time if you’re visiting our desert camp don’t forget to try the special food in Jodhpur.

Mirchi Bada and Mawa Kachori, are the special dishes of Jodhpur

Mirchi Bajji (chilli cutlet) or Mirchi Bada is a spicy Indian delicacy made of batter and chilli (mirchi) and potato or cauliflower stuffing, which is fried in oil, and can be eaten hot with tomato sauce or, on occasion, mint and tamarind chutney. Mirchi bada is made with banana pepper. The mirchi bada of Jodhpur, Rajasthan, is famous because the water in that location gives it a distinct flavour. It goes nicely with mawa kachori, a special food of Jodhpur that is dunked in syrup.

Mirchi bada is a popular street snack in Jodhpur. It’s made with thick and less fiery green chilies that have been filled with a spicy-tangy potato stuffing, dipped in gramme flour batter, then deep fried till golden and crispy. It goes nicely with another street snack, mawa kachori, and tastes best when paired with zingy coriander chutney or tomato sauce.

During monsoon season, when temperatures drop and a cool wind blows through the town, a hot cup of tea paired by a dish of steaming mirchi bada is unsurpassed, with locals flocking to the booths and businesses serving this delicacy. It is now recognised as menasinakayi (chilli) bajji in Southern India and mirch pakora in Northern India. 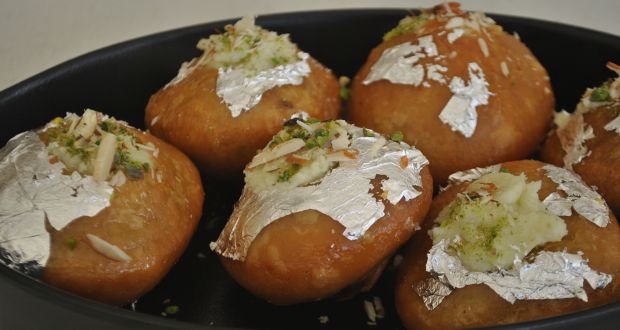 Mawa Kachori transcends all prejudices, one crunchy taste at a time. As you might expect, this wicked sweet delight is filled with mawa and almonds and drenched in sugar syrup.

Rajasthan’s culinary heritage has always captivated foodies and adventurers. Rajasthan’s rich gastronomy never fails to impress, from the hot curries and lip-smacking chutneys to the lively street food. Kachori is a famous street meal in Rajasthan as well as in the United States. Fried and crispy snacks, from Dal Kachori to Pyaaz Kachori, may make us crave at any time. But did you know these savoury nibbles have a’ sweet’ relative as well? Yes, you heard us correctly!

Mawa Kachori transcends all prejudices, one crunchy taste at a time. As you might expect, this wicked sweet delight is stuffed with mawa and nuts and drowned in sugar syrup – it may or may not be laced with nuts and fragrant spices. Mawa kachori can be available in sweetmeat stores or Mishthan bhandars across North India, including Haryana and Delhi, in addition to Rajasthan. You may also term these kachoris a type of sweet, puffed pastry.

Mawa, also known as Khoya, is an Indian dairy product. It is prepared by thickening whole milk in a saucepan. It adds a richness to any sweet, which is why many Indian confectioners, such as barfi, gulab jamun, and halwa, use it to make their desserts more delicious. You can create mawa at home or buy it from a store.

Mawa Kachori can be eaten hot or cold, depending on personal choice. When the sweetmeat is new, it is oozing with sugar syrup; as it cools, the sugar begins to build a white shell around the kachori. For many people, Mawa Kachori is a ceremonial dessert served at community meetings, local festivals, or temple feasts. For some, it’s just that one exceptional treat that makes them want to cheat on their diet. In any case, if you have a strong sweet taste like us, you will love this nutritious Mawa Kachori recipe.

Jodhpur, India’s blue city and the second largest city in Rajasthan, is known for its tradition and architecture. The city, which is recognised for its forts, palaces, temples, Havelis, and even residences built in vibrant blue hues, is also known for its traditional gastronomy, which adds flavour to city life. Among these foods is Jodhpur’s famed ‘Mirchi Vada.’

According to Rajasthan Patrika, the snack is so popular in the city that it consumes more than 75,000 Mirchi Vadas each day, with the figure increasing to 1 lakh Mirchi Vadas sold per day during the rainy season. Because it is readily available, the snack is regarded as a lifeline for the daily wage worker. The renowned Jodhpur Street meal, also known as ‘chilli cutlet’ or ‘chilli fritters,’ is made with ‘Bhavnagri chilli’ stuffed with traditional ingredients, dipped in a blend of Gram flour (Besan flour), and then fried in hot frying oil.

Mirchi Vada, served with Chutney, is not only popular in Rajasthan but is also a popular snack throughout India. The snack is known as ‘Rajasthani Mirchi Vada’ or ‘Jodhpuri Mirchi Vada’ in Rajasthan. Next time if you’re visiting our desert camp in jodhpur don’t forget the Food to try in Jodhpur.

Here are some fascinating facts regarding Jodhpur’s snacking lifeline:

There are around 1,000 ‘Mirchi Vada’ vendors in Jodhpur.

Currently, there are over 1,000 merchants inside the city selling such a snack, all of whom specialise in the preparation of Mirchi Vada.  Out of these 70-80 establishments, Mirchi Vadas are traditionally acclaimed, and the number of people visiting these shops to buy the snack is rather large in contrast to others. However, as the wet season approaches, Mirchi Vada

distributors can be found at every landmark all through the city. Next time if you’re visiting our desert camp in jodhpur don’t forget the Food to try in Jodhpur.

Many people rely on ‘Mirchi Vada’ for a living.

Many sellers run their businesses solely on the selling of Mirchi Vada over other snacks. Chilli fritters are increasingly available at sweet and dessert shops as well. The city’s mood is such that as soon as clouds appear in the sky, people race to the nearby shops to get the popular snack. Next time if you’re visiting our desert camp in Jodhpur don’t forget to try this special food in Jodhpur.

Chili Cutlet and the Commerce Involved

As the popularity of the ‘Mirchi Vada’ grows in the city, so does the sale of the ingredients necessary to make the snack. Bhavnagri chilli, seasonings, cooking oil, bread, and Besan flour are selling at an all-time peak. This growth in the selling of ingredients is extremely profitable for the businesspeople who sell these goods. The chilli cutlet is a must try special food when you visit our desert camp at Jodhpur.

According to a study published in Rajasthan Patrika, up to 75,000 Mirchi Vada are sold every day in Jodhpur, with this figure increasing to roughly 1,00,000 during the rainy season. This special food of Jodhpur is one of the most famous specialties, adored by both rich and poor alike. Many individuals eat them for breakfast on their way to work. Your visit to our desert camp at Jodhpur will prove this point.

Fry as many as we can!

The snack is so popular in the Blue City that few merchants state that no matter how many ‘Mirchi Vadas’ are produced, they are all sold, and the number increases significantly during the rainy season. Many folks are unhappy when they return from the store because the product has run out.

Apart from the well-known Mirchi Vada and traditional cuisine, the coloured city of Jodhpur is also known for its architecture and design splendour. The large and majestic forts that tower surrounding this lovely city combine to provide a stunning view that you will not want to miss. The city’s iconic landmark is Mehrangarh’s massive, astonishing stronghold, which offers a landscape perspective dominated by a rocky ridge and eight gates heading out of the fortress. Next time if you’re visiting our desert camp in Jodhpur, do remember to try this special delicacy.