Story of Cranes of Khichan

Khichan, a small village is a part of the Thar Desert in Rajasthan. Several Jain traders lived in Khichan in the last century. But now they have migrated to larger cities and Khichan has turned into a deserted tourism spot. The village has been recognized by Rajasthan Tourist Development Corporation. Khichan is about an hour’s drive from our Manvar Resort in Jodhpur. You can surely put the place on your list of things to do when you are in Rajasthan.

It all started in 1970 when Ratanlal Maloo returned to his village from Odisha where he was working. He was assigned a task to feed the pigeons. Along with pigeons some more birds and squirrels came along for the grains. In a few days a dozen of Demoiselle Cranes started visiting looking for the food. Later a large group of migrating Demoiselle Cranes became regular visitors.

By the End of August, once the monsoon has come to an end, the cranes migrate from their origins. As we begin our desert camp from October 1st in Manvar, our resort in Jodhpur, it is the perfect time to visit Khichan. The sleepy village is crowded with thousands of cranes and the environment is filled with their noise. These cranes are called ‘Kuraj’ locally. The area has now been organized in a natural manner as every year the number of birds increases. There are about 6000 birds now. 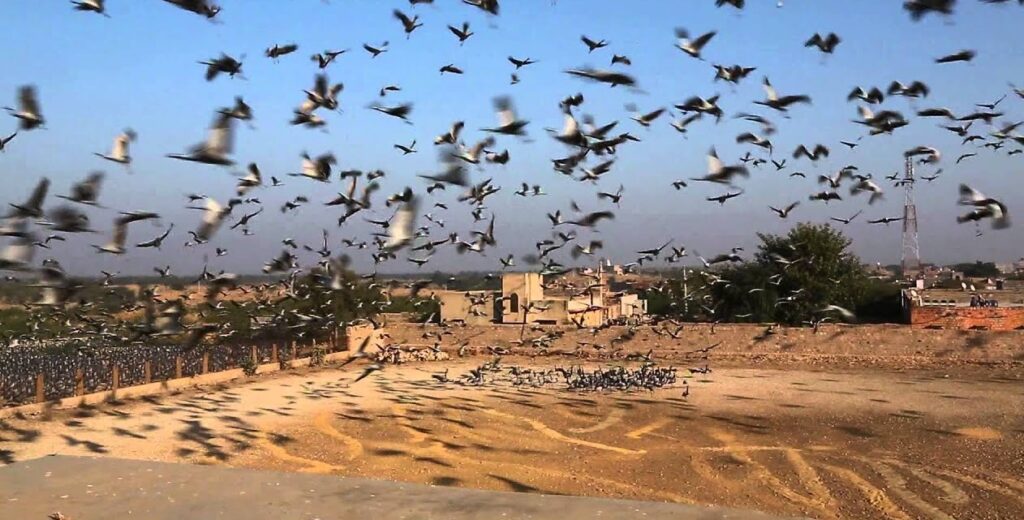 There is a daily routine designed for these cranes. Rectangular enclosures of 50*60 m called Chugga Ghars are created because cranes were often disturbed by dogs and villagers at the edge of the village. The cranes have a breakfast session of about 90 minutes where are fed in groups one by one. After feeding the cranes fly to the ponds or sand dunes or to the conventional mansions or heritage buildings. The sight of large flocks together is a photo-op for a large number of tourists who visit the village for bird watching.

The cranes in small flocks of families fly in different directions. Led by the female, followed by a young one who stays close, and the male forms the rear guard.

Around midday, they come back for water and a bath and have lunch. You can get a sight of mutual affection between couples sometimes. They take a rest in agricultural fields at night and return early in the morning, the next day. 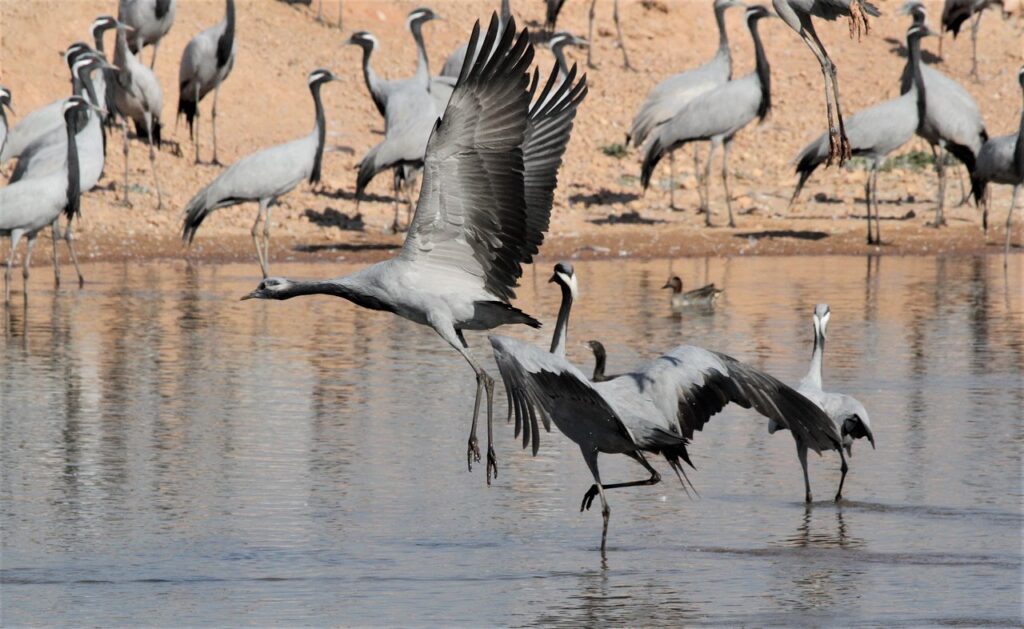 Ratan Lal, a volunteer, provides up to five ‘quintals’ (500 kg) of grain per day for the birds throughout the high season (November February). It is his early morning and afternoon duty. This is all paid for by monetary donations from local people and visitors, administered by Kuraj Sanrakshan Vikas Sansthan, a newly established society in Khichan for crane protection and care.

After the early morning feed, the cranes gather in the sand dunes, where they face the rising sun. It’s a fascinating sight to watch. Later they depart in the sky and land on a barren area of khichan and continue feeding in the soil. After their midday meal and bath in the pond, by 3 p.m, suddenly the entire flock of birds leaves the pond and flies westwards.

The cranes usually don’t get disturbed by the passing camel carts and people, but if a passer-by ventures too close, the whole flock would fly away. Visitors often find this spectacle amusing and intentionally disturb the birds.

Along with these cranes there are Indian Peafowl , Sparrows, Crows, Pavo Cristatus, Rock doves, Macrorhynchos, Corvus, Columba livia all participating in a free meal.

The village was internationally recognized when it was featured in Birding World magazine in an article titled, “Khichan – the Demoiselle Crane village”. It has now become popular among bird watchers from all around the world.