The land of the great Thar desert and the Kings, Rajasthan welcomes you for experiences filled with grandeur and roots. The name itself can be translated into ‘land of the kings’, and suitably so, you can see royal architecture and traditions like no other in the largest Indian state. Roam around the numerous forts and palaces, go on desert safaris or take visits to the culturally rich villages spread across the land of Rajasthan.

You can also visit the tiger reserves or have a taste of history in the ruins of the Indus Valley Civilization. Out of the many cities and towns famed for things unique to each, Jodhpur remains an iconic favourite of many.

The historical city is the second-largest in the state of Rajasthan and was formerly a princely state under the British Raj known as the Jodhpur State or Kingdom of Marwar. It was surrounded and encompassed by walls centring the massive Mehrangarh Fort, but now has expanded much outside the walls. 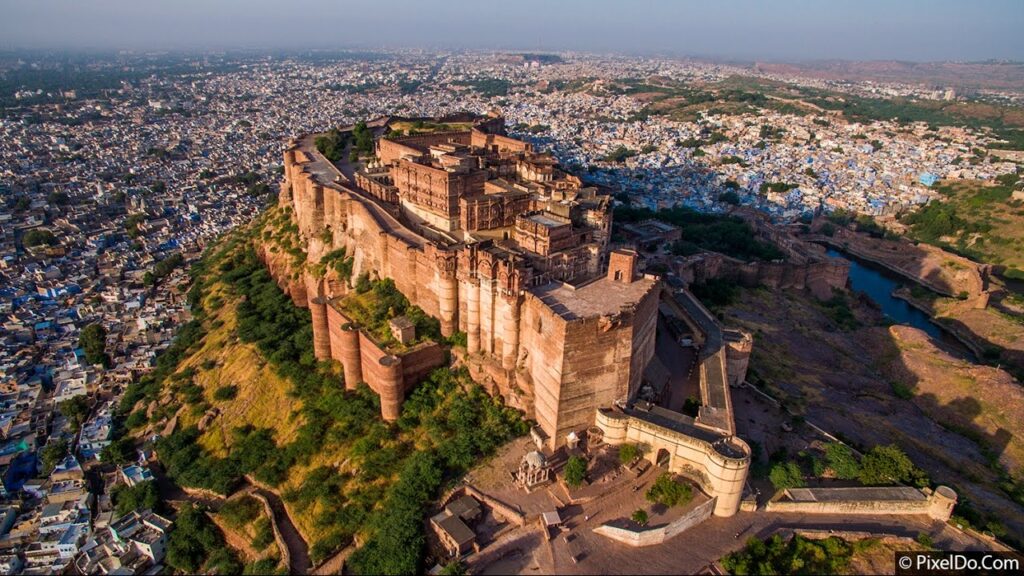 The Rathores were the prominent dynasty that resided and ruled over this region in ancient times. Jodhpur now is the second metropolitan city in the state and boasts a rich industry of handicrafts which amounts to about $200 Billion; which is also why it is known as the Handicraft Hub of India.

Many heritage hotels and resorts in Jodhpur are featured in magazines, so far as being featured in The New York Times as one of the places to visit in 2020. It is one of the top destinations to tour in India. Exploring the city of Jodhpur is one of the most inspiring experiences, right from the historical sites, the colourful personalities of the citizens and the large variety of delicious Rajasthani food. The city is well-known for its blue-hued bylanes in the older part of the city and is hence, called the blue city of India.

The Mehrangarh Fort, Umaid Bhawan Palace and Jaswant Thada are amongst the many attractions here. And along with those, we have the clock tower of Jodhpur, Ghanta Ghar. Amidst the hustle-bustle of the old city and the market that it is situated in, Ghanta Ghar is a popular landmark in the city and garners several tourists that come to admire the architectural delight of the past. It is positioned about 1.5 kilometres from the Jodhpur Junction and 3 kilometres from the fort.

The clock tower aka Ghanta Ghar was built more than two centuries ago, around 1880 to 1911 by Maharaja Sardar Singh of Jodhpur. It stands in the centre of the city and boasts an enthralling panoramic view of the old city as well as the Mehrangarh Fort. You can actually go right to the top of the tower to enjoy this scenic frame. And in the cool evening breeze, the clock tower comes to life with an ensemble of lights making it glow from the within, just enough to create a beautiful puzzle of light and shadow over nearby shops and streets.

It is located near the Sardar Market named after the late King and is surrounded by more than 7000 small shops and merchants selling all kinds of things from handicrafts, sarees, the infamous silver jewellery, Rajasthani textiles, juttis, bangles, kurtas, souvenirs, clay figures, miniature statues of animals like camels and elephants, the finest variety of fresh and powdered spices and a plethora of other things. This place is an absolute paradise for shopaholics! Not just shopping, but the food scene in this market is bound to make your mouth water. You will find a variety of shops and stalls selling freshly prepared street food, Indian sweets, fried goods, and all the essences of Rajasthani cuisine along with a delicious wave of aroma wafting throughout the market.

After a long day of roaming and shopping in abundance through the narrow streets and gullies of the Sardar Market, clicking all the pictures, eating a stomach full of tasty and hearty Rajasthani food, and encasing the beautiful views from and of the clock tower, take a final look at the glowing Ghanta Ghar, a pride for the city of Jodhpur, and then make your way out of the market and back to the comfort and calm at our Manvar resort in jodhpur. A day in Jodhpur well spent indeed!